Berici Hills environment could provide primitive people with all that was necessary to their survival: many caves and natural shelters, water springs (some of thermal water), flint and many animals to hunt are enough reasons to explain man's presence ever since the early Palaeolithic Age. (in San Bernardino's Cave in Mossano).

Numerous are the archaeological findings in Berici Hills that date back to Middle Palaeolithic, like Neanderthal man's Musterian Period tools and items that have been recovered by stratographic excavation in Bernardino's cave and Brojon Cave near Lumignano . 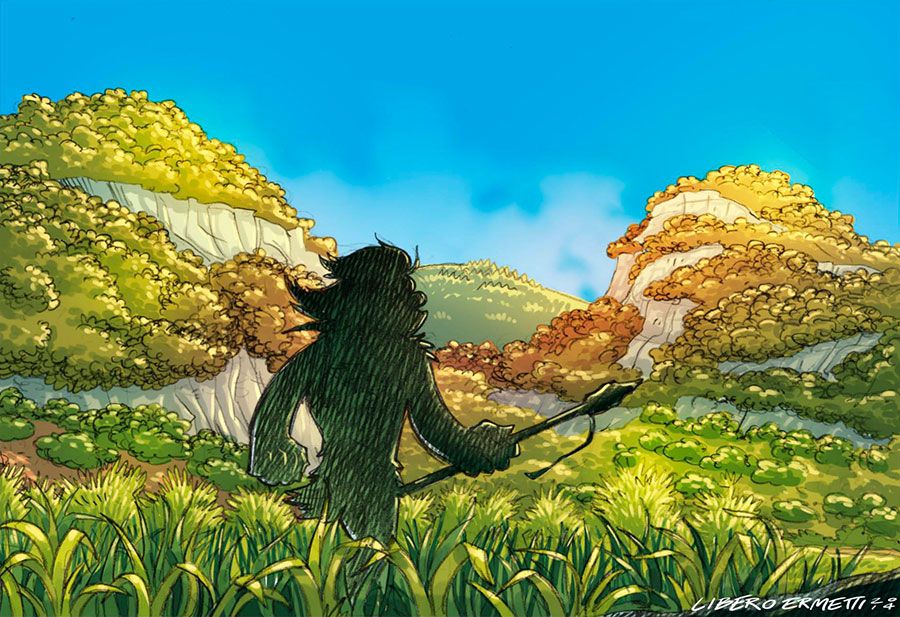 Late Palaeolithic Age saw the arrival of modern men and the extinction of Neanderthalians. Modern men's stone artifacts were very different from Neanderthal men's; beside hunting they devoted themselves to activities such as fishing and the collection of fruit and berries; some of their artifacts testify to elaborate religious beliefs. Late Palaeolithic artifacts were found in Paina Cave, Brojon Cave, Trene Cave and other caves near Costozza. The age between Palaeolithic and Neolithic is called Mesolithic.

In Berici Hills, mesolithic findings were discovered in Grottina dei Covoloni del Brojon, near Lumignano. This cave's stratigraphy has especially marked out in layer 7 traces of Sauveterrian industry and in layer 6 traces of Castelnovo lithic industry.

During Neolithic people started value their properties, abandoned nomadic or semi-nomadic ways of life and start dwelling in groups of buildings. Neolithic revolution began in the Near East during the 12th-10th millenium b.C., in modern-days Siria, Iran, Lebanon and in the Nile Valley, in the so-called Fertile Half-moon.

This revolution was probably triggered by favourable climatic conditions; in an environment where plants grew abundantly people slowly learned how to cultivate and store them; Italy was still covered in Ice Age's ices.

In Emilia we find the so-called Fiorano Culture that expanding northwise reached Berici Hills (Pianezze di Arcugnano and Pojana Maggiore) and Euganei Hills (Le Basse di Valcalaona); its influence can be traced down all the way to Friuli where we find the Fignicola Group and to Trentino where we find the Gabàn Group. West of Fiorano in the Po Valley there is the Vhò Group and west of it the Varesotto Group and the Isolino Group.

At the beginning of the 4th millennium b.C. a new neolithic culture appeared, that has been named Culture of Square-shaped Vases (V.B.Q.). V.B.Q. Culture can be found in Veneto in three succesive phases, defined by different patterns of pottery decoration.

Towards the close of the 4th millenium b.C. Megalithic cultures (Sovizzo buring sites) and Aeneolitiche (Remedello, Campaniforme) became predominant. After the finding of Similaun Man, who is thought to have lived in 3200 b.C., we had to anticipate of about a thousand years the beginning of the Copper Age or Aeneolithic, although in Bocca Lorenza Cave had already been found three flat copper hatchets of the Similaun type, but they had been assigned to the V.B.Q.

Culture. Stone artifacts during the Metal Age reached unparalleled artistic perfection, like exquisitely shaped knives, scraping tools and arrow-tips, sometimes made for decoration purposes only. Aeneolithic sites in Berici Hills are the famous caves of the eastern side, in Fimon Valleys and in some recently discovered open-plain sites (Barbarano Vicentino).

The earliest examples of cremation of the dead date back to this period. Aeneolithic in Beric Hills should better be called Calcolithic, since no copper item has ever been found in situ. The Copper Age was followed by the Bronze Age at the beginning of the second millenium b.C., which was to last for about a thousand years.

It is commonly diveded into four periods: the Ancient Age, epitomized by Polada culture, that goes from the 18th to the al 15th century b.C., whose characteristics have been recognized in findings in Lovolo di Albettone and the Fimon Valleys; The Middle Age, from 15 to 13 hundred b.C., characterized by pecularly shaped pottery 3-D decorations (horns, half-moons, leaf-like etc.); the Recent Age, from 13 to 11 hundred b.C., when pottery was decorated by ribbon-like stripes -during this Age people stopped using flint; the Final Age from 11to 9 hundred b.C., a Proto-historic age that ultimately blurred into the Iron Age (9 - 3 hundred b.C.).

The Iron Age was characterized by numerous very culturally differentiated groups, almost one in every part of Italy. During the 9th century b.C. Palaeoveneti people arrived to Berici Hills, an eastern people that didn't yet know writing and lived in humble abodes, but that was skilled in handicraft and horse-breeding.

Palaeoveneti brought to Northern Italy some techonological innovations, like the eployment of iron itself and that of the potter's wheel. In a few burials uncovered in Este, the main centre of the period, funerary treasures were found, of a richness that reminds that of the Etruscan princes' of the age .